What is a turbocharger and how does it work?

Just about everyone knows that a turbocharger generally provides more power. But what exactly is it and how does turbocharging work? From the history to how it works to different variants of turbochargers.

What is a turbocharger?

The turbocharger draws its energy from the normally unused residual pressure of an engine's exhaust gases. An exhaust gas turbine drives the compressor, thereby increasing the air pressure flow rate or reducing the intake work of the piston, resulting in an increase in engine output or efficiency.

In 1905, the Swiss Dr. Alfred Büchi registered a patent for the so-called equal-pressure or accumulative supercharging - he is considered the inventor of the turbocharger or exhaust gas turbocharger. For more than 100 years, this technical innovation has been further developed and is now one of the most important components in motor sports and is also increasingly used in private cars and commercial vehicles.

The real breakthrough of exhaust gas turbocharging in passenger cars came with the introduction of the first turbocharged diesel engines in the Mercedes Benz 300 SD in 1978 and in the VW Golf turbodiesel in 1981. With the aid of the turbocharger, the efficiency of the passenger car diesel engine was increased and the driving performance values of the gasoline engine were almost achieved. At the same time, pollutant emissions were reduced.

In exhaust gas turbocharging, part of the exhaust gas energy lost per se is used to drive a turbine. A compressor sits on the shaft of the turbine, sucks in the combustion air and feeds it to the engine in compressed form.

Compared with a naturally aspirated engine of the same power, the turbocharged engine has lower consumption because a portion of the exhaust gas energy that would otherwise not be used contributes to the engine's power. The smaller displacement means that both friction and heat losses are lower, as are the installation space required and noise generation. The power-to-weight ratio (kg/kw) is significantly lower and the torque curve can be optimized. Turbo diesel engines can be operated with an excess of air, which means they can be operated with fewer pollutants and lower fuel consumption. 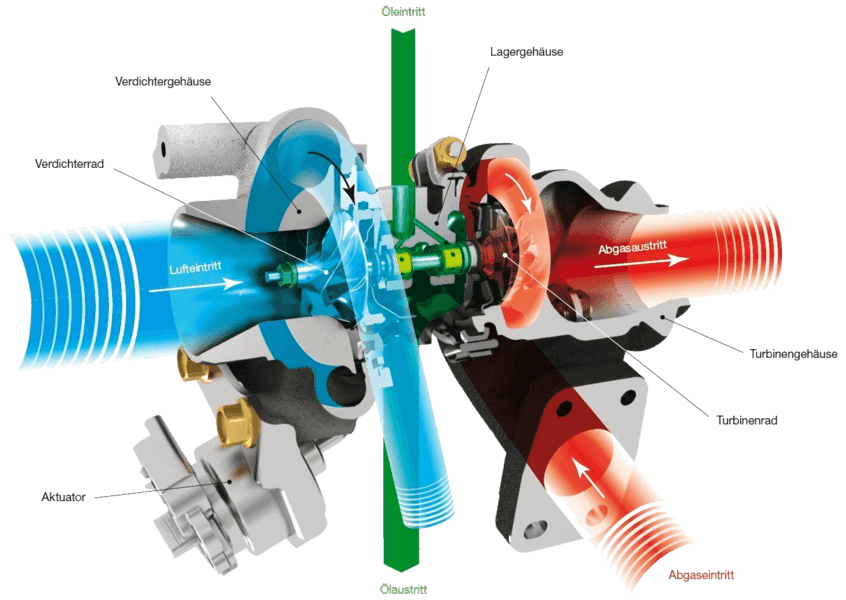 The green area shows the path of the oil and all the points in the turbocharger that are supplied with oil and cooled. It can be clearly seen that the oil ducts are much finer than the supply line. This increases the pressure with which the bearing is supplied with oil.

The path of the exhaust gas is shown in red, which is exactly the opposite of the path on the fresh air side. Due to the worm shape of the housing, the exhaust gas is additionally accelerated and reaches the turbine wheel, which is connected to the compressor wheel via a shaft, at a higher pressure. We achieve the desired boost pressure.

The functionality of the bi-turbo and twin-turbo is comparable to that of a normal AT turbocharger. The difference is that two superchargers are used in parallel. In the case of the bi-turbo, there are two smaller superchargers, each of which is supplied with exhaust gas from four cylinders in an eight-cylinder bi-turbo engine, for example. The resulting reduced moment of inertia can improve the efficiency of the entire system as well as throttle response.

In mechanical turbocharging, the combustion air is pre-compressed by a compressor driven by the engine instead of using the exhaust gases for this purpose. The increase in power achieved is partly offset by the high drive power of the compressor. In contrast, there is no mechanical coupling with the engine in the case of an exhaust gas turbocharger.

What problem do you have with your turbo engine?

If you drive a vehicle with a turbo engine and have a problem with the turbocharger, we can help you. Our TurboExperten workshops are professionals in all aspects of turbochargers and turbo engines and are available throughout Germany to help you with any turbocharger-related problem.

Our partner workshops receive regular training on the subject of turbochargers, as this sensitive technology requires a high level of technical expertise for repairs.

If you value high quality, competent advice and fast processing of the repair, then TurboExperts is the right place for you. By the way, the specialists in the workshops are not only turbocharger experts, but also usually offer all other services related to repair, maintenance and overhaul of vehicles of all types and brands.

Find a TurboExpert near you

Find a service center near you!